From Fauve to Cubism: Geoges Braque 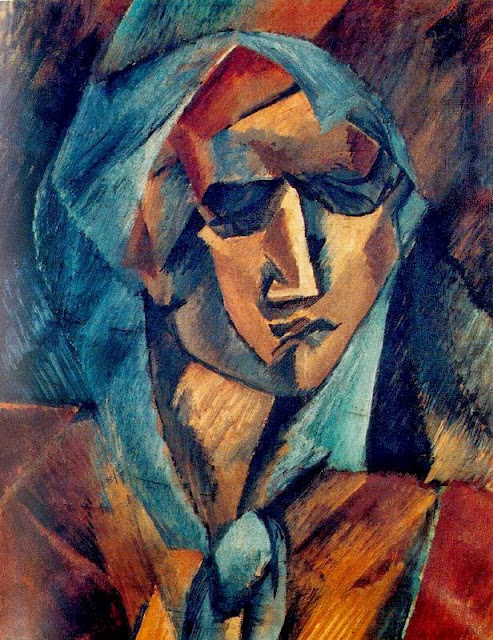 "I couldn’t portray a women in all her natural loveliness… …I haven’t the skill. No one has. I must, therefore, create a new sort of beauty, the beauty that appears to me in terms of volume of line, of mass, of weight, and through that beauty interpret my subjective impression. Nature is mere a pretext for decorative composition, plus sentiment. It suggests emotion, and I translate that emotion into art. I want to express the absolute.."
Georges Braque, 1908


Cubism, one of the most influential visual art styles of the early twentieth century, was created by Pablo Picasso and Georges Braque in Paris between 1907 and 1914. The French art critic Louis Vauxcelles coined the term Cubism after seeing the landscapes Braque had painted in 1908 at L’Estaque in emulation of Cézanne. Vauxcelles called the geometric forms in the highly abstracted works "cubes".

Pablo Picasso and Georges Braque
In 1909, Braque began to work closely with Picasso, who had been developing a similar approach to oil painting. At the time Pablo Picasso was influenced by Gauguin, Cézanne, African tribal masks and Iberian sculpture, while Braque was mostly interested in developing Cézanne’s idea’s of multiple perspectives. “A comparison of the works of Picasso and Braque during 1908 reveals that the effect of his encounter with Picasso was more to accelerate and intensify Braque’s exploration of Cézanne’s ideas, rather than to divert his thinking in any essential way.” The invention of Cubism was a joint effort between Picasso and Braque, then residents of Montmartre, Paris. These artists were the movement’s main innovators. After meeting in October or November 1907, Braque and Picasso, in particular, began working on the development of Cubism in 1908. Both artists produced paintings of monochromatic color and complex patterns of faceted form, now called Analytic Cubism.
Pubblicato da Unknown a 4:43 PM